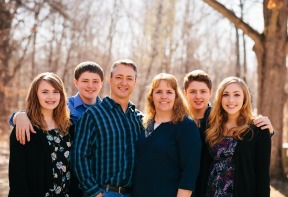 Bruce Van Natta is the founder and president of Sweet Bread Ministries. He is a common, everyday person that serves the Living God who is anything but ordinary. His journey from prodigal son to full time ministry stretched out over three decades berfore culminating in a display of God’s power and grace. Starting at an early age in Bruce’s life the Lord proved Himself faithful repeatedly, despite tragedies and countless bad choices and decisions made by Bruce. After high school the Lord called Bruce into ministry, but instead of being obedient he ran away and chose his own path which led to more problems and addictions. As the years passed the Lord kept calling and knocking at the door of Bruce’s heart. Slowly things began to change as the Holy Spirit continued the sanctification process in Bruce’s life. Eventually he was brought to the startling revelation that God’s grace and mercy are not reserved only for those who have made all the right choices, can recite 100 Bible verses, or stand behind a pulpit—-God’s love is for everyday people, everyday! In 2006 Bruce was crushed underneath a semi-truck and was at the verge of life and death when he had an “out of body” experience. During this near death experience he got to see the two angels that the Lord had sent to save his life. Bruce is the only person Doctors can find who has ever lived from some of the injuries he had. (If you wish to hear more about this go to the “Media Center” and view or listen to Bruce’s 30 minute testimony.) Bruce wrote the book “Saved By Angels” which is available at most book stores and on the net. The story has garnered international attention recently so Bruce has been on; Sid Roth’s “It’s Supernatural” TV and radio shows, the Trinity Broadcasting Network, and 5 episodes of the “It’s a New Day” TV show. He has also been on “100 Huntley Street” and the “Nite Lite” TV shows as well as several radio shows and his story has aired  on the “700 Club” several times. In Decmber 2009 “Guideposts” magazine did a feature article on him for their Christmas issue and “Charisma Magazine” told his story in July 2010. Since recovering from this accident he and his family have gone into full-time ministry sharing their gripping testimony wherever the Lord leads. They have felt led to not only minister to the body of Christ but also to those in need, resulting in building an orphanage in Honduras and a church in India with home equity as well as doing prison and jail ministry. He and his wife Lori and their four children-Lauren, Caleb, Jacob, and Emily live in Wisconsin.